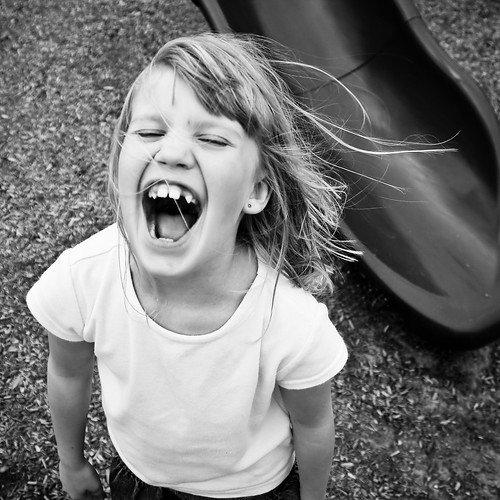 I have a confession: I am an extravert. Let me paint you a picture of a typical dinner with friends at our house.

My introvert husband gets the dinner ready. I say,
‘Now, don’t just stay silent the whole time like you usually do, you need to make an effort.’
Jon reluctantly acquiesces. Then the people arrive – and I’m off.

I can’t help it. It’s like I turn into an excited puppy dog. I don’t quite jump on people and lick them, but I do the verbal equivalent. As an extravert, I need to be vocalising something in order to really know what I’m thinking. A friend can say something that will trigger a thought in my brain, and before I know it, I’ve just said it, rudely interrupting them mid-flow.

If there’s a silence, I try and count ‘mississippily’ to three before I speak: ‘One Mississippi, Two Miss’ – and then I can’t stand it and I’ve blurted out something random. This means that there are often dinners where, despite my best efforts, my more introverted friends’ contributions to the conversation merely serve as prompts to my babbling, continuous monologue.

At the end of the dinner, exhilarated, I will look at Jon, wondering why he didn’t say anything again.

So often I find myself in conversation with introverts, and they don’t say anything. As long as they’re smiling, and not saying anything, I assume that they are so enchanted by my winsome personality and fascinating discourse that they simply don’t have any room left in their brains for anything else. Sometimes, I will confess, I view introverts as a blank canvas onto which I splash my bright, oh-so-interesting stories.

It came as quite a shock when I entered Twitter and the Blogosphere, and discovered that introverts have thoughts. LOTS of them. Interesting ones at that, and strong opinions and quirky stories. I just don’t always stop to hear them. (That’s mainly because I used to be able to sing opera and my lung capacity, even at my ill level, is still good enough for me to be able to spill an awful lot of words without the need to draw breath.)

I posted last week on Vicky Beeching’s blog about Introverts, Extraverts and Twitter, and loved the discussion in the comments section. It sparked so many thoughts for me, which I may well turn into a later series. I was reminded that because extraversion/introversion is about where you get your energy from, not all extraverts have the need to verbally vomit over people as I do, and not all introverts are shy and retiring.

I was also very grateful for the reminder of how often introverts are overlooked. As someone who is housebound and doesn’t see people as often as I used to, I have a fresh appreciation for what it feels like to be trapped and silenced, and to have so many words that you want to get out, but you’re not being allowed the space to do so. (Introverts and shy friends, forgive me?)

And, lest you think that it is always easy for the extraverts, let me share with you my feelings when speaking to an introvert who isn’t smiling at me. I start panicking that the introvert is silently (and smugly) judging me. My internal monologue goes something like this:
‘Oh no! They’re not saying anything! They must think I’m a moron – or maybe they’re completely offended! Quick – say something to make it better! Oh no – that was even more idiotic! And they’re STILL not saying anything!’

Before I know it, I’m talking about sex, inevitably, and everyone in the room (justifiably) thinks I’m a little crazy. And still they don’t say anything.

I am someone who is exuberant and passionate, and energised by others. Some of that is reflected in my blog, but I also realised that my tone in my blog was far quieter, more reflective and controlled than my ‘real life’ self. This is my shadow-side, my back stage. I hadn’t fully realised before, but I was sharing that shadow side of myself to the parallel world of the Blogosphere.

Being ill has made me into an honorary introvert, pulled into the exciting domain of Twitter where the introverts rule and the shadows of our collective consciousness creep through.

23 Responses to On becoming an honorary introvert