Micha Boyett (aka Mama Monk) is someone I would choose as a mentor or spiritual director. Rooted in scripture, she is always considering the spiritual in the everyday. Her writing is compelling and digs deep. I’m excited to share her God and Suffering story with you here:

We’re at the doctor’s office (again) because this virus that hasn’t left the confines of our home for six weeks has now made its tidy home inside my twenty-month-old’s chest. Brooksie is coughing himself awake every two hours in the night. My husband and older son have the same cold, but their coughs are different, normal. And I recognize my baby’s cough. It sounds like mine.

Sure enough, when the doctor listens to his lungs she hears the wheeze.

I was never one of those asthmatic kids who got rushed to the hospital in the middle of the night. Most often, my asthma was good fodder for a joke, a nice reason to have to stop running lines in volleyball practice. My inhaler was something to carry in my hand and tinker with so I wouldn’t feel so awkward with the girls on my gymnastics team.

The worst moment came during some croup-like infection in middle school, or maybe younger, maybe 5th grade? My mom had gone to the store and left my 8thgrade brother with me. I started coughing and couldn’t stop. And then I couldn’t get the air in. I was breathing through some angry, invisible straw and I was losing. My brother saw the panic in my eyes and I saw it in his. That’s when I started crying. Crying and gasping and trying to take the air in. My brother, in all his 13-year-old wisdom, took me to our parents’ bathroom, sat me on the floor, and turned the shower on hot so I could breathe the steam. Then he left me and waited for mom to come home. I remember somewhere in that moment of terror hearing him say, “You know it doesn’t help to cry. You have to stop crying.” And I did. I sat alone in the bathroom, the steam soaking my skin and snaking into my lungs. And I breathed. I sat and I breathed. 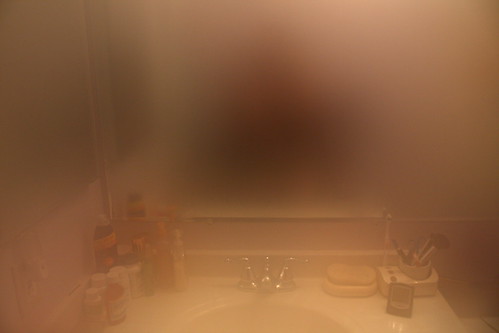 He’s wheezing but it’s not a big deal, the doctor says. It’s small, she says. And I find myself sitting on a chair with my son in my lap, holding a mask connected to a tube, steaming out the asthmatic nectar. I lift it to Brooksie’s face. The doctor says, hold it till the steam stops coming. Then she leaves. One minute in, he’s crying. Five minutes in, he’s writhing on the floor and I’m writhing with him. Wherever he throws his body, wherever his red face rails, I’m not letting that mask off. He will breathe it in. I will make him breathe it in.

I gather him and kiss him and press the mask against him and he roars and kicks and tries to break my grip. Across the small office, my older son has imaginary conversations with the Mysterious Cheetah (his favorite invisible friend) and I mentally kick myself for not packing a toy for him. Every once in a while August clenches his fists and screams: “Stop Yelling Brooksie!” When August flies across the room to hit his brother, I stop him. But I don’t even try to reprimand. It doesn’t matter. I’m holding a terrified child, forcing medicine into his lungs.

I don’t think of that moment with my brother until after the breathing treatment. Later, at home, I show Brooksie my inhaler and let him watch me use it. “Look, baby! You have one too! Just like Mommy!” I hold it to his face so he can suck it in.

This is supposed to be a post about suffering. What do I have to say about suffering? I who has never lost a pregnancy or child? I whose marriage is life-giving? I who wakes to a fridge full of food in the morning. and washes her dishes clean at night? Who am I to say anything about loss, about sorrow, about broken bodies or broken lives?

I was holding my son in the doctor’s office and after fifteen minutes, when the last bit of steam had puffed out, I let him go. He stood seven feet away from me, his back to the wall, and cried, his face red with betrayal. How could I? His mama? For fifteen minutes he had cried and begged me to stop this thing and I had held him tight-lipped and determined. Of course he wouldn’t come to me to let me undo his suffering with a kiss, a cuddle, a promise that he doesn’t understand now, but someday…

Don’t give me a parable about how God loves us and lets us break under his forceful hand, you say. Don’t tell me God holds the mask up to our faces and weeps that we don’t understand how This Is The Medicine. This is the air that our lungs must take in.

Don’t tell me you know what God feels when we lose the friend we most needed, watch his body waste while tumor eats his brain.

I won’t. I won’t. Metaphors always fall flat, don’t they? Nothing is as it should be. Everything is made for bright, free air but breathing is faulty here in this world. We are living in this undone place. We are mamas waking up the next morning, our right shoulders sore from the clenching, from the battle with our baby over steam and lungs and what it means for everything to be made right.

Micha Boyett is a youth minister turned stay at home mom trying to make sense of vocation and season and place in the midst of her third cross-country move in three years. She is mama to two blonde boys and wife to a very tall Philadelphian. She is tinkering away on her memoir The Mama Monk and practicing prayer with her eyes open and her arms deep in sticky dishes. She blogs at Patheos about motherhood, monasticism, and the sacred in the everyday. Connect with her on Twitter or like her Facebook page.

21 Responses to How to take the air in {guest post}