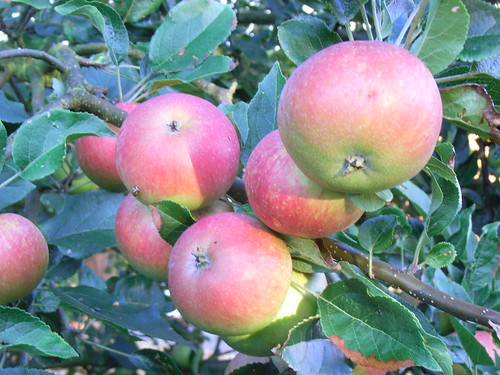 There were some words in stone, as if written by the finger of God:

“You are nearer to God in a garden than any other place on earth”.

It was on the first paving slab of the path in our garden. My parents hadn’t put it there, I guess it had been commissioned by a previous occupant. I didn’t know if it was from the Bible, but the writing was so regal. It felt good to run your finger in the grooves of the letters.

I was eight and I would hop hop hop from paving stone to paving stone, away from the house, following the path to the end of the garden. Hop hop hop past the dark sturdiness of the privet hedge, hop hop hop up the rocks, hand resting on the lucky stone toadstool with its crumbly moss, past the greenhouse, through the whispering leaves of the weeping willow. At the end of the path I’d squeak open the gate to the secret part of the garden, all berries and fruit trees.

This was the hidden place where I would make my worlds.

“We are in medieval times and you are running away from a witch and when you clap your hands as you jump over the log you go into the Stone Age”, I instructed my siblings, (or my dog, whomever was available.)

Whatever I called it, that would be its name; I ruled over this part of the garden, the earthworms and sweet grass and tall apple trees. I would do handstands and pick snowdrops and walk with God in the cool of the day. I would stand under the cherry tree, rattling the blossom, hands raised up as it snowed its white confetti over me, pure petals falling so slowly, floating in the breath of the wind.

There was another path that led from the house in the opposite direction, from the front door. We would go on walks along the path, over the river and railway line, round the back of the orchards, telegraph poles and train tracks stretching out along the hills, water tower and cathedral in the distance.

It was early autumn, I think, the time before the leaves turn sunset. There was brown in the ground and green on the trees and grey in the air. My parents were at home, and I was walking with my friends-from-up-the-road and their parents, wellies squelching together. We were discussing which was better, the Girls Friendly Society or Girl Guides, and I was trying to explain that I had no interest in either of them. One of the adults picked an apple from a tree we were passing, then the others chose theirs too.

“Do you want one?” my friends’ mum asked me, and she smiled but there was something in their glances.

I hesitated. I wasn’t sure if that was the kind of apple I liked to eat. But it was rude to refuse something when it was offered, so I nodded, and bit into it, sour and hard.

Then as we rounded the corner, we saw it, a chugging tractor with the farmer on it. The adults stopped biting their apples, and threw them to the ground.

I pushed my hand through the pocket of my coat – the apple was too big and it got stuck at the mouth of the hole; I had to force it through, scraping my hand against that unyielding material winter coats are made of. We stopped talking as the farmer rode past slowly.

The sound of the farmer faded into the background after this peculiar incident. Then one of the adults turned to me.

“Bet that’s the first time you’ve stolen something, isn’t it?” They sniggered and the laughter came through their teeth, like a hiss.

In all my eight years I had never stolen anything. Was it really stealing if you didn’t know you were doing it?

We walked out of the orchard and turned east; my cheeks burned apple-red.

Joining with Amber on Mondays for concretewords, where we practise writing by communicating the abstract through concrete things – a horse, a book, stairs – and today the Path. These concrete words posts have led me on a journey through childhood and nostalgia and spiritual maturity – I write and that’s what comes out at the moment.

Amber is taking a break from concrete words and I will be hosting for the next little bit. The prompts for the next few weeks are as follows:
Feb 18 – the cupboard
Feb 25 – the instrument
Mar 4 – the dress
Mar 11 – the bottle

Anyway: or Confessions of a recovering perfectionist
Through my eyes {guest post}