I had the pleasure of working alongside Clive Parnell briefly when we were both involved in student ministry. He is a talented singer-songwriter with a passion for God’s word and the gospel is obvious. His songs beg to be sung at top volume out of the window of your car as you drive along sunny country lanes. He has a gentle manner, and a skill for creating environments where spiritual conversation flows. Here’s his Christianity and Creativity post – over to Clive: 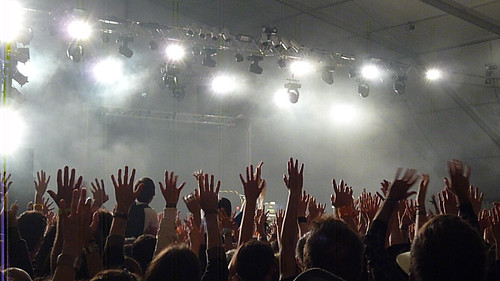 Look at this picture and what do you see?

I was struck by how many people’s hands are lifted in the air in a worshipful way. This is not a Christian worship event. This is a photo taken at a music festival in Germany in 2009 with bands including The Prodigy and The Black Eyed Peas. As a Singer/songwriter this reminds me how powerful music can be. I write songs that I play in pubs, student unions, festivals and even record stores (remember them). I also write songs that I play in churches and see as a service to help people worship. I don’t see a secular/sacred divide here but rather songs written for different purposes and for different occasions.

Music is universal, you can go anywhere in the world and you will find people singing, playing instruments and dancing. Music is part of everyday life but how much do we appreciate it?

Has music become a consumeristic item that is there to buy now and again as we create our playlist for life?

Is music something that sits in the background as we buy a latte in a coffee shop or as we wait in a lift? Has music become the subtle subliminal soundtrack of our lives?

I believe that it is important to engage with music just as people would engage with films or books. Each songwriter has a worldview and is communicating a message. This message could be as simple as “My baby has left me”. “I feel good” or “I will fix you” but each lyric conveys thoughts about the world we live in.
I love how music can speak to both our heads and hearts. Some atheists might like to prove that God does not exist but are often challenged but the beauty and otherness of music.

“I try not to believe in God, of course, but sometimes things happen in music, in songs, that bring me up short, make me do a double-take. When things add up to more than the sum of their parts, when the effects achieved are inexplicable, then atheists like me start to get into difficult territory.” Nick Hornby

There have been many occasions where ardent atheists have been cold towards what I have to say but have been receptive to hearing my music and then discussed it afterwards. There have also been times where people have been struggling in their faith because of suffering, grief or intellectual doubts. In such circumstances people have found great comfort and have told me that they hearts been spoken to and challenged.

I believe Music is a gift from God and I think he loves it. It is amazing to see how much editorial space is given to music in the Bible. 150 Psalms, song of songs, and key songs at key times – Moses crossed the Red Sea and what did he do?  He co-wrote a song with Miriam. (Exodus 15)

What did Moses do just before he died? He sang a song. (Deuteronomy 32)

Jeremiah wrote a song of grief in Chronicles 35:25, Mary wrote a song after Jesus birth and there are numerous songs sung in Revelation. I think we can see that songs are important to God.

I think that songs reflect the meta-narrative of life. This could be termed “Home -away from home – home” as my friend Ellis Potter says. This pattern is reflected in the parable of the prodigal son. All is well, there is togetherness and wholeness, the family is together. The son then leaves home and there is brokeness, hurt, shame and guilt. Then there is a return home and there is cause for celebration, the father runs to welcome the son home. The music begins, the dancing is in full flow and the father throws the party of all parties.

Lyrically and musically many songs follow this pattern. Inside us all is a real desire for home, for belonging to be loved to be known and held, to know what true home is.

This thinking has largely informed my work and musically I have written songs along these themes. I have found that these songs speak to people as it is our human longing to be home. From a creative perspective this framework has given me and many others the freedom to be able to write about a number of subjects. It is possible to write about being broken, hurt, grief and doubt because these are a reality of life not to be swept under a carpet. It has also been possible to write songs about love and belonging as these too are realities of what it is to be human.

More recently I have taken up the challenge of writing songs that serve the church. Songs that some might call worship, hymns or choruses. I have however had a problem with this challenge. The greater trial has been a musical challenge. How do you write songs that don’t just sound like I’ve downloaded the latest systematic theology book and transposed it to music? How do I write songs that don’t just sound the church version of Coldplay?

I have thought a lot more about the words and what music what be most suitable. In other words I have written the lyrics first and then composed the chords and melodies. As I have written an album called “Amazing love” I began to see songs forming that had more of a gospel, soul and roots feel to them. The songs speak of love, joy and peace.

The humbling process of writing and recording this album has reminded me that music is a gift from God. I don’t need to justify my gift but be a good steward of it for his glory and his fame. I pray people may be blessed through the songs whether they are Christians or not.

Clive Parnell is a singer/songwriter, worship leader and a Pastor at Kirkliston Community Church (near Edinburgh). He is married with three children and a puppy, so life is a bit quiet.
He is probably best known for being the lead singer in a band called Indigoecho and even has the T-shirt to prove it. He has just finished recording a new solo CD “Amazing Love” with producers Graeme Duffin and Sandy Jones. The album will be released on CD and MP3 in September 2013. You can hear his music and pre-order the album here.

Photo on Christianity and Creativity button by Darren Johnson.

What Being a PhD Student Taught Me about ‘Being Creative’: Reflections from a Former Artist
Tattered: Redemptive Creativity {Christianity and Creativity series}

8 Responses to The gift of music? {Christianity and Creativity series}