Christmas has knocked me out a little, as it does each year, which is why this December edition comes as it does in the heartlands of January. Indulge me with a little Christmas remembrance…

Christmas itself was a delight. I had one good, clear evening with my parents on the 23rd, where I was able to be my ever-witty and scintillating self – then the next day I was utterly wiped, and good only for watching Audrey Hepburn in Funny Face. I ate all my meals from bed and rested hard. That meant that on Christmas Day itself I couldn’t really interact, but I was well enough to witness, and as one friend pointed out to me, that’s mainly what Christmas Day is about, anyway – watching the youngest member of the family rip open gifts in excitement. I received some really thoughtful gifts, and felt very loved, and remembered Jesus’ gift to humanity of his own humanity. 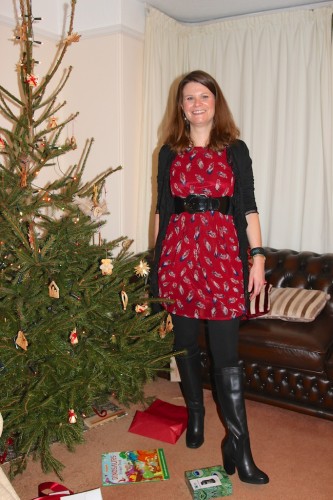 (Are you ready for a bumper-load of December books?)

(Posh woman on confronting rich husband about an affair): My husband denied everything. I may as well have been Congress.

(Posh woman looks around Kimmy’s humble flat) URGH. I need to get out of here before I get airborne diabetes

Boyfriend: I should warn you, they just announced a new iPhone is coming out which means all our phones will stop… (phone spontaneously combusts in his hands) Damnit.

This year our Mary and Joseph huddled round a fire, as refugees

ME News – Stigma and Mistreatment of ME Patients

ME News – The PACE Trial scandal

Does the PACE trial have the right to withhold data? The PACE trial is a very influential trial in the UK that has been used to justify the NHS’ ongoing recommendation that ME patients be treated with ever-increasing exercise. Recently the dubious methods they used to justify their conclusions have come to the attention of several journalists and academics. One particular academic has requested some of the raw data under the Freedom of Information Act – but the PACE trial authors are refusing to release the data, claiming any request for data as necessarily ‘vexatious’.

What makes this particularly surprising is that this particular trial was funded by UK taxpayers (the Department of Work and Pensions – not the Department of Health – funded it, perhaps because they were concerned by how many M.E. patients are unable to work), so one would have thought that transparency was all the more important. Read some of these articles to get a sense of the drama:

NB – a special thanks to everyone who responded to my request to leave a short review on Amazon or Goodreads. Every single review – no matter how positive – makes a huge difference in Amazon’s marketing, so I’m massively grateful for all your kind words.