Joining with Amber on Mondays for concretewords, where we practice writing by communicating the abstract through concrete things – a Horse, a book, stairs – and today I’m catching up and doing a double whammy: The Sweater and Frost. These concrete words posts have led me on a journey through childhood and nostalgia and spiritual maturity – I write and that’s what comes out at the moment. Join me? 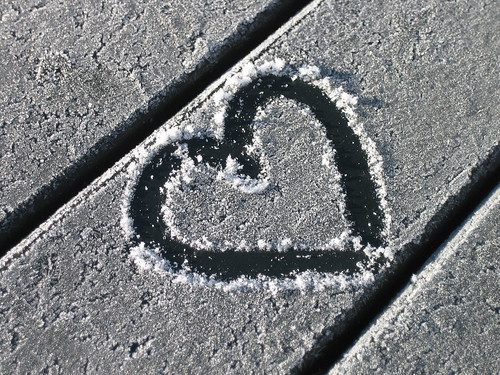 I was not really accepting visitors, as I had been hit hard with a virus and been in bed for the past fortnight, but he came in anyway. He was wearing a new black fleece with some trendy white mark on it, which he had gone on a special trip for.

“Come for a walk,” he said.
“I can’t,” I protested. “I’m still getting better,” but I was pretty much better and I was bored. I was annoyed and excited that he completely disregarded my protests.

He was only a friend, and he was rather irritating. He had a habit of not listening to me. And yet, here I was, trudging up the cobbled streets in the cold Durham air for the first time in two weeks, falling into a rhythm together as my shoulder leant against his arm.

We stopped in the cathedral, and sat on a cold bench for a few minutes. There was a simple quiet among the tall arches and we paused and felt it together. It was cold, and I could sense his warmth through his fleece.

We left the cathedral and he walked me home, eyes brighter and cheeks flushed from the crisp air.

Months later, I asked him what on earth encouraged him to continue to pursue me when I had given him no indication that he might be successful in his romantic suit.

“In the cathedral,” he said. “You snuggled.”
“I did not!” I protested.
“Oh yes, you did,” he said, triumphantly. “There was definite snuggling. It was the reason I bought it.”

Fourteen years after that day in the cathedral, I stroke that same black fleece. It feels as comforting to me now as it did then.

Frost is not as magical as snow, but it is an acceptable substitute.

School bags hastily fastened, we would bundle out of the house into refrigerated beauty, everything spiky and white, spiderwebs turned into chandeliers. Each word was imbued with extra self-importance, heralded by real-life speech bubbles, our invisible breath transformed into clouds of powerful air.

We would crunch across the lawn over to the car, and swish at the windows, our woollen mittens coming away with a sprinkling of cold sand-grains which melted, droplets adorning the fuzzy threads. I would take off my mittens, and scratch at the hard ice with my nails, forging a path through, leaving my mark, my name, my words, till my fingers were numb and red.

We would take a step back from the car and admire our art, the ice bunched up into tiny mountains and valleys on the glass, chaotic dark lines running through the purity of the ice, haphazard slices through the canvas.

I liked the feel of the crunch of my feet on the grass, but I would look back with regret at the bent stalks, my footsteps exposing a green and brown bruised path through the crystal lawn.

I compare the purity and magic of God’s creative finger and the chaotic lines from my red and numb one, and wonder: is there a way of creating that highlights His work rather than tattooing my name on top of it?

Previous concrete words posts:
Halfway up the stairs
One Book
The horse

20 Responses to The Sweater/ Frost